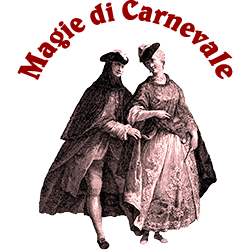 Even during discounts choose Quality! 🌟 You can get 20% off any product by adding Coupon MAGICWEEK22 to your shopping cart!
Only from 23th November to 8th December!

VeniceLetter 1 – The True Meaning of Carnival

VeniceLetter 1 – The True Meaning of Carnival In Roman times there was a period at the end of winter when people could disturb the strict social order going back to a kind of primal Caos without laws and bans, regenerating men and nature with spring arrival.

Nowadays Carnival is a festival full of happiness, dance, masks, music, and laughs..this tradition came to us from the Middle Age.
Then it became a Christian Catholic ritual: revelry before the lent.

We are almost sure there were mask’s making artisans in Venice since XIII century.

Thereafter it was from XVIII century that Venice Carnival became the most famous in the world. The most ancient way to hide your identity: masquerade!!!

With a mask on their faces they could be someone else, someone unconventional, trasgressive, funny and creative, celebrating life in the Caos.

That’s why Venice became a special stage where everything could happen being completely anonymous. The Venice Carnival starts with the traditional flight of the Angel or flight of the dove, from 500 years ago when a turkish acrobat walked for the first time on a robe from the pavement of Saint Mark’s square to the very top of the bell tower.

From that moment it was called Turkish flight and they continued the tradition year after year until 1759 when a big accident occurred: the young acrobat felt down from the robe to the ground and died.
A tragedy and a big fear for all the people in the square. That’s why from that year Venetians they replaced the human element with a wooden dove that, descending from the Campanile of San Marco to the loggias of the Doge’s Palace, shed flowers and confetti on the crowd.

From there they changed the old name into the new “Flight of the Dove”.

Recently, from Carnival 2001 they re-introduced the flight of an Angel in the flesh, secured to a cable, dive into the void from the Bell tower to the stage in the Piazza, marking the beginning of Carnival.

To receive news from Venice,
curiosities and offers from Magie di Carnevale
subscribe to The VeniceLetter