“Commedia dell’Arte” Masks, the History of the Characters

A brief introduction to the Commedia dell’Arte Masks and the History of popular characters Costumes of Venice.

The masks used in the ‘Art Comedy’ (Commedia dell’Arte) were completely different from the masks worn daily during Carnival.

Commedia dell’Arte is first defined in 1750 in the play ‘Il Teatro Comico’ by Carlo Goldoni.
The Venetian author describes the actors who act Commedia dell’Arte using masks and improvising their roles (for the first time in a western theatre we have professional theatre companies, no longer just amateur ones).

In fact, the term ‘Arte’ in Italian has two meanings: the fine artistic work, but also the craft work or profession (as in the Arts and Crafts corporations).

Acting then assumed a new structure and the play script was limited to a plot, around which was constructed a loose narrative describing what was supposed to happen to the stage.

The mask and costume strongly characterized the style of acting and often became synonymous with the personage itself with well-defined characteristics.

Here you can see our collection of Commedia dell’Arte Masks

The most famous characters of Commedia dell’Arte 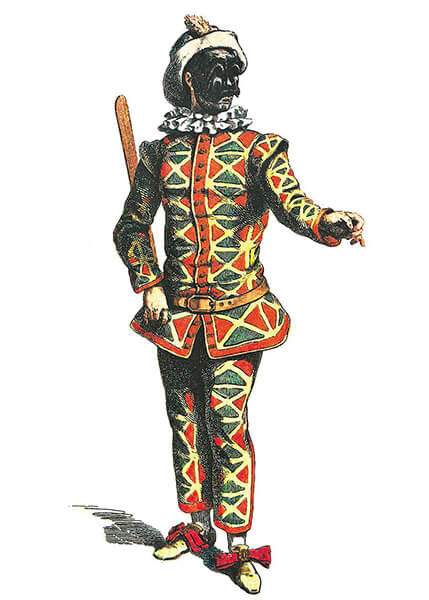 •    Harlequin, originally from Bergamo, is the most engaging and famous of the characters; he is the dishonest servant, perennially hungry, foolish, ingenious and a busybody.

Harlequin’s costume is made up of a short jacket, close-fitting multi-colored patchwork stockings, a white felt beret and a stick (batocio) at his belt. His half-mask is black with a snub nose and a lump on its forehead (typical of the Zanni). 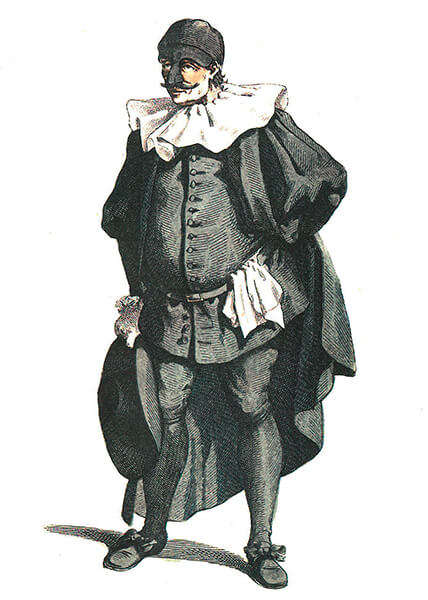 •    Balanzone, also known as the Doctor, is characterized by his obesity. This mask derives from Bolognese university life.
He is a proud, bossy character, who loves to ramble on, giving long ‘sermons’ with Latin quotes that are nearly always out of place. 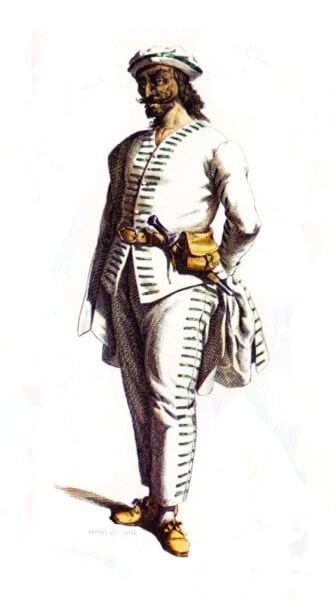 •    Brighella, often in the role of the ‘first Zanni’; is the cunning servant, in contrast to the ‘second Zanni’ Harlequin. He has no scruples and adapts himself to any kind of work.

His costume is made up of a large shirt and wide cloth trousers, and his jacket is decorated with green stripes, vaguely resembling a livery.

He sometimes wears a short cloak and an odd hat. He is an expert musician and singer who often accompanies himself on the guitar.

•    The Captain is the comical swaggering soldier, the roots of his origins can be found in the plays of Pluto. The most famous Captains are Spaventa, Fracassa, Matamoros, Spezzaferro, and Cardone.

His role in the Commedia dell’ Arte is that of the demanding lover he often comes into amusing conflicts with the Zanni. The costume is multi-colored and striped with gilded buttons. He wears a plumed hat and a long sword. 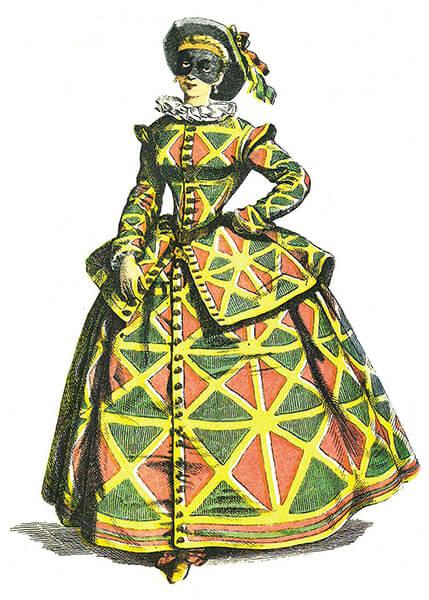 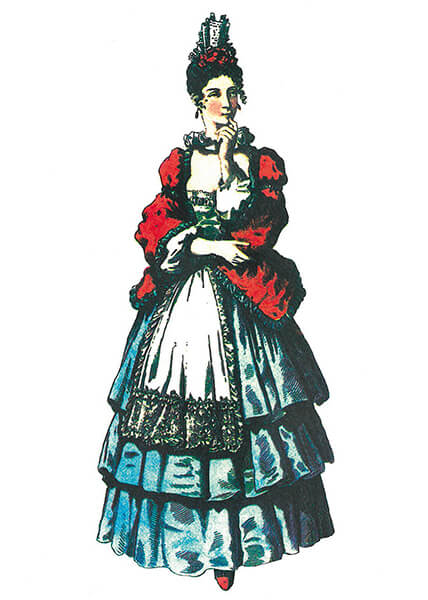 •    Colombina is a maidservant. She is often coupled with Harlequin. Shrewd, sly and gossipy, engaging for her typically feminine wiles, she is also known as Harlequina, Corallina, Ricciolina, Camilla e Lisetta.

Her costume is simple, similar to that of Harlequin’s, with numerous colored patches. She wears a white cap and apron.

•    Giangurgolo, a Calabrian character, has a mask with a huge nose, which makes him resemble the Zanni.

•    Meneghino, ‘symbolic’ character of Milan, is a diminutive of the name Domenico. 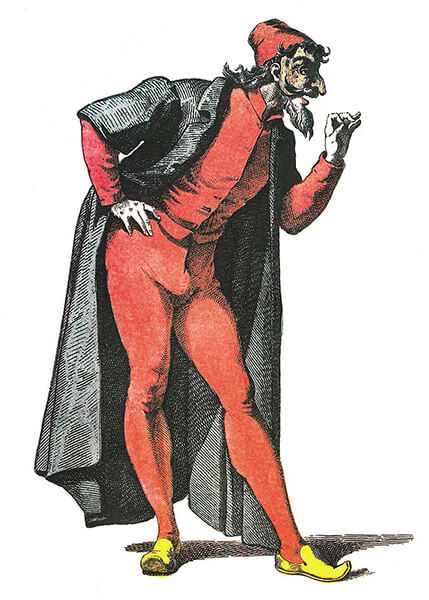 •    Pantalone is a famous Venetian character who is also called ‘the Magnificent’. An old merchant, he often competes with younger men in the conquest of some young woman.

For this reason, he is often caught up in complicated affairs from which he extricates himself with difficulty.

The costume is a woolen beret, a red jacket, pantaloons with a belt from which hangs either a sword, handkerchief or bag.

He has a black cloak lined with red draped over his shoulders and wears black pointed Turkish slippers. His mask is characterized by a turned-up nose, accentuated eyebrows and a strange pointed goatee beard.

Pantalone represents the commercial spirit and talent for business which was gaining ground in the Venetian middle classes. 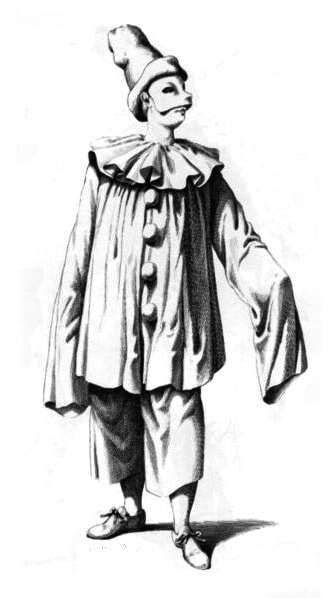 •    Pierrot or Pedrolino, started life as a Zanni who was then developed into the famous romantic person with a much stronger dynamic character thanks to the mime artist Jean Gaspard Debureau.

Who also defined his costume: an ample white outfit made of a jacket and trousers, with black buttons, a small black skull-cap, and whitened face. •    Pulcinella, in the French version Polichinelle and in English Punch, is the most well-known character from the south.

He is often the melancholic servant and combines the characteristics of foolishness with a large pinch of intuitive sense.

He uses lively gestures, typical of the Neapolitans: Tiepolo immortalized him in more than one of his paintings.

His costume is a white shirt, tied with a belt. He wears an elongated hat and a black mask with beaky nose and wrinkles. •    Scaramuccia (Scaramouche) is Italian, but met with huge success in France, and comes under the category of Captains.

Thin, gaunt and frail, he appears to have grown up in poverty; he is small in stature, of a yellowish complexion, with a broad forehead and arched eyebrows.

Big-nosed, garrulous, easily frightened, impulsive but also wise, ingenious and ready to take the side of the little man, even if his timorousness often puts a spoke in the wheel: his comic effect lies in this conflict.

•    Tartaglia, half blind and stammering, comes into the category of the ‘old men’, often in the role of a notary.

•    Truffaldino, an 18th century ‘second’ Zanni, the poor servant tormented by hunger and greed, struggling to survive and whose aim is to serve two masters in order to eat for four people.

This figure is halfway between a caricature of the traditional servant and the charming gentleman which avoids being grotesque. •    Zanni is one of the oldest characters of the Commedia dell’Arte, but he soon made way for servants who became more important in the history of the Commedia, with their own names to distinguish them from each other.

In the 17th century, his role doubled into the ‘first Zanni’ sly and scheming and the ‘second Zanni’, often more foolish and incompetent, characterized by their jokes and acrobatics.

The Zanni masks retain a small bump on the forehead, the remains of cut-off horns, which suggest their demonic origins.

The name Zanni, like Zuan, is a Venetian version of the name Gianni (John), a popular name in the Veneto-Lombard region from whence came the greater part of the servants to aristocrats and wealthy Venetian merchants.

His costume is wide-skirted, of yellow or greyish beige, usually worn by peasants when working in the fields, and a particularly large hat with a wide brim.

His mask is made of white leather or at least of a lighter color than the black masks of Pantalone or Harlequin.